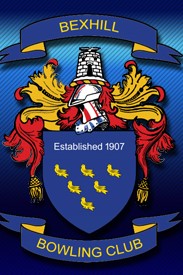 The Bexhill Bowling Club was founded in 1907 and  played  on the only Bowling Green in the town at Egerton Park, now played on by the Spartan and Lakeside Bowling Clubs.

With Bowling growing in popularity a new green. measuring 42 x 35 yards was laid down and opened in 1908.

The Bexhill Club became affiliated to the Sussex County Bowling Association in 1911 when club rules were drawn up an adopted.

During the 1911/12 season, due to the very poor condition of the green and the failure of Bexhill Council to extend the small pavilion, members were seriously discussing purchasing a piece of land to establish a private club. This never came about and the next few years were taken up with regular discussions and deputations to Bexhill Council.

In 1921 Bexhill Bowling Club became affiliated to the E.B.A. and also joined the Hastings League.

By 1924 membership of the Club was starting to grow quickly and the Council were beginning to realise that good Bowling greens might be an asset to the town and so two new greens were laid in the Polegrove Recreation Park. Bexhill Bowling Club subsequently move to Polegrove.

In 1932 at a special meeting a Bowls Tournament at Polegrove was planned for the year 1933 and with a few gap years, it is still held annually with the co-operation of the other town and area clubs.

On July 23rd 1937, the Mayor officially opened a third green at Polegrove and the membership had increased to 140.

Interest in indoor bowling was also growing and in September 1941 Bexhill Bowling Club agreed to set up bowling in the Egerton Park Pavilion, during the winter months. The first indoor Tournament was held in 1942. It consisted of triples only and was open to Ladies and local clubs.

It may be of interest to know that Earl De La Warr was one of the early Presidents of the club and that Charles Gulliver was also a member before funding his own private Bowls Club in the town.

1959 saw an extension to the Polegrove Pavilion and a breakaway from the club by some members who wanted to play on Sunday, and  formed the Polegrove Men’s Bowling Club.

In 2003/4 the Bexhill Men successfully amalgamated with the Bexhill Women and the club is stronger and even more progressive from the experience.

2007 was our Centenary Year and as well as this brief history there was a booklet produced and a full season of special bowling activities and a Tour to the Isle of Wight.

2011 Was another notable year for Bexhill Bowling Club. Ross Clifton was elected Sussex County President, a great honour for him and our club.

The County played a number of games at our club greens and held the County Finals Day for the first time, hosted by Bexhill Bowls Club.

The Mayor of Bexhill was in attendance to enjoy the day. Our ladies provided a special lunch for the occasion. A day to be remembered by all.

The club continues to flourish and provide good recreational facilities for all. We are delighted to say that a number of those in the photograph of 2007  below, still regularly compete in our competitions and matches.